One of the requests we had for content this WOVEMBER was from NellieAnneJane, in our Ravelry group , who was interested in learning about dyeing processes. When JANET MAJOR got in touch and sent us a picture of her natural dyed SHWOOK hat we asked her if she would like to enlighten us about about the dyeing process and her inspiration for the colours. She very kindly agreed!

Anyone who is lucky enough to have been to Skaw Beach at the far north of the island of Unst, Shetland will know it to be a beautiful place. Wanting to take back something to remind me of this, I took a photo of some of the seaweed.

When last year Hazel Tindall designed the Fair Isle Shwook Hat for Shetland Wool Week I had the idea of spinning the wool from one of my precious Jamieson and Smith fleece and naturally dyeing the yarn. I would then wear the hat when I went to Wool Week. The spinning of the wool and knitting the hat are another story but here I will describe how I took inspiration from the seaweed on Skaw beach to naturally dye the colours.

The pattern suggested five colours, grouped as two dark and three light or vice-versa. Looking at the seaweed, I decided to aim for two greens, two purples, a grey and the bright pink/red along with the background of the beach.  I would modify the pattern accordingly. This is the hat I knitted first using yarn in my stash – checking the colours, amounts of yarn and size of hat.

Any dyer will tell you that to match colours exactly a sensible person will use acid dyes for wool. However, I decided that natural dyes would be far more suitable for this hat. After all I was spinning Shetland wool and taking inspiration from Skaw beach. So, for the dyeing, I first prepared the yarn into skeins of a suitable weight for each colour (fingers crossed at this stage that my length/weight calculations were right). These were then scoured: I use washing up liquid of a well known brand and bring the solution containing the skeins to 65oC. Then the yarn is mordanted with alum (8%) and cream of tartar (7%). I labelled the skeins with the colour they were to be. I was also running parallel samples of commercial 4 ply wool. I knew the colour would not be identical on these, but it was the best practice I could manage. I have to say I have a fairly comprehensive sample folder of my own natural dyeing too.

Dyeing the greens
I decided to use marjoram from the garden as my dye source as it gives a nice olive colour. After chopping and heating the leaves and then straining them the skein was added. After the dyeing some of the dye liquor had iron sulphate added to it (and heat) to give the dark olive colour. Challenge one appeared. How much darker was a wet skein than a dry one? This was something I had not thought about. I kept my nerve and achieved a colour I was happy with. The next challenge was to get another similar hue – lighter but one that would sit happily next to the first. I decided against doing the same thing again but with less iron as I was concerned the difference in hue might be too subtle. For the lighter olive I decided to use elder as the base dye. I was a bit surprised to get a strong yellow but kept my nerve and on using copper and iron with vinegar as modifier at the end I got just the colour I wanted.

What was clear at this stage was that the natural yarn colour that I hoped to use as the sand colour was far too stark against these lovely soft greens, I had to get my thinking cap on again. Fortunately I had just completed some solar dyeing with red clover brought back from a holiday on South Uist and I judged that would just colour the natural yarn enough not to jump in my face with the pattern colours. What I good job I still had some of the extract stored in the garage. So far so good with the colours!

Dyeing the purples
Again two different related hues were needed. I knew how I was going to do this in theory – dye with indigo and overdye with cochineal. However, this took many trials and unlike the green I was stuck with getting the two hues from the same method. Eventually I achieved success with my commercial trial skeins, the indigo bath was going well and 5% cochineal was the chosen concentration. Then slight panic set in when the Shetland wool skeins were very different from my commercial wool skeins. However on drying I decided I liked the slight heathery look and that this added more interest to the overall colour design. Now to try and achieve a significantly lighter hue of purple. Using one indigo dip not three and then over dyeing with cochineal achieved the result but not without some doubting along the way. This was turning out to be a nerve wracking experience and I decided to spin more wool in case I had a real disaster with the remaining grey and pink.

Dyeing grey
This turned out to be the most difficult shade to achieve. I didn’t want it to be nearly black as it would be too dominant compared to the colours I already had. I had several abortive attempts but giving up was not an option now I had got to this stage. I remembered that I had used a grey in some art yarn I had made for an exhibition some years ago and luckily I had some of the solution left. This worked and gave me a light/ medium grey; it was OK and worked well with the other colours. It was a mixture of logwood, elder and tin. I was irritated with myself as I like to know percentages (e.g. of logwood, tin and elder) but have no one else to blame only myself . This reinforces the need to label accurately as you never know when you might need the information.

Dyeing the pink red
This was meant to be the final colour of the set. A straightforward 10% cochineal dye – starting with crushing the beetles. My original plan was to use the cochineal in the centre row of each of the two bigger fair isle pattern sets, but it was going to be too strong. A look at the seaweed picture again led me to some old gold yarn that was already dyed (with heather and tin modifier) I think this change at the last minute added considerably to the original design.

This is how the hat turned out. Lots of lovely comments were received at Wool Week 2014 and the real joy to me was that the hat figured on the front of The Shetland Times, in the picture showing the crowd going into the Opening Ceremony. We took the completed hat to Skaw beach and here are the two versions worn by DH and myself! 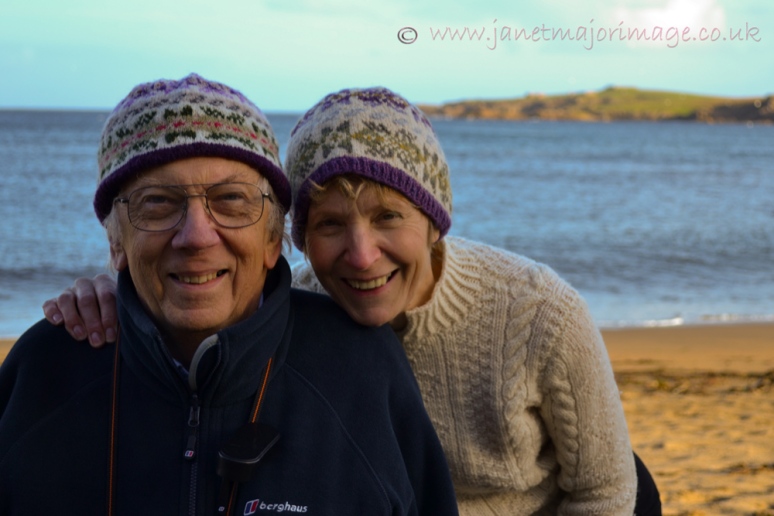 Oh and I didn’t need the extra yarn and had some left from each colour too. So, during wool week I knitted some fingerless gloves to go with the hat!

Thank you so much, Janet. It is incredible to see the process from inspiration to finished item, and what a wonderful souvenir of happy memories of a trip to Shetland?!

Have you created something from an inspiration source like this? Perhaps you are making it for this year’s WOVEMBER WAL! Don’t forget that any wool projects you complete this month (regardless of when you started it) can be entered into our WAL and all the details are here.

Come back this evening when Woolly Wormhead will be here to talk about dyers!

2 thoughts on “Wovember Words: Skaw Beach – an inspiration in dyeing”